I Just wanted to take this opportunity to post an update based from the previous post about filling divots.  I have been very happy with the job that all of the membership has done filling their divots on fairways and tees during each round.  Lets continue this process as the fairways heal from previous damage.  If we can continue to work together the fairways will have the turf coverage that we are all looking for.

I would also like to say a special thanks to member Bill Batchelor who has volunteered his time every Monday while we are closed to help with the divot process.
Posted by Stillmeadow Maintenance Staff

Klint and Randy Go To School 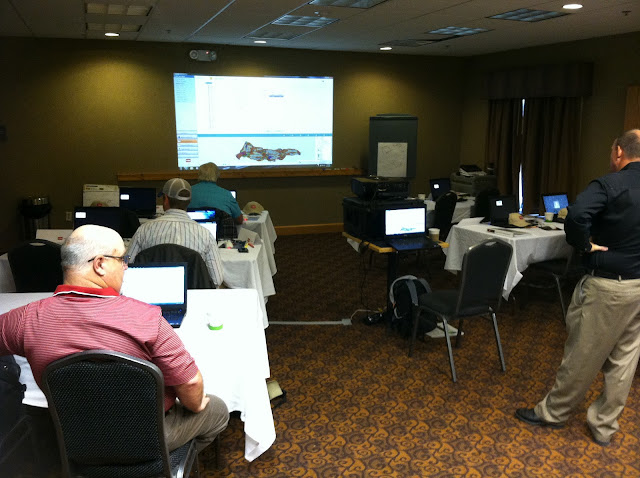 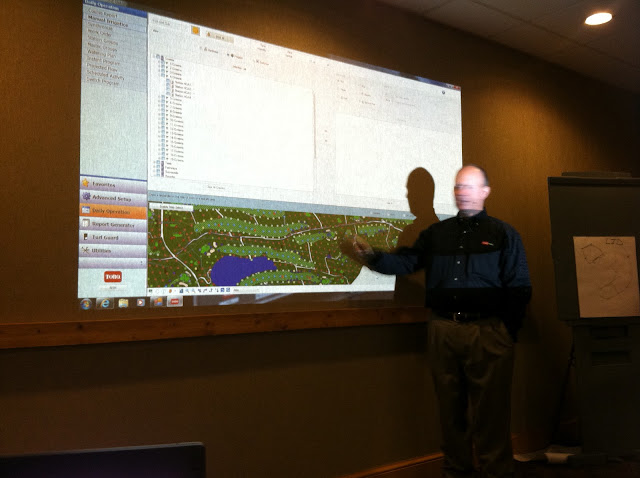 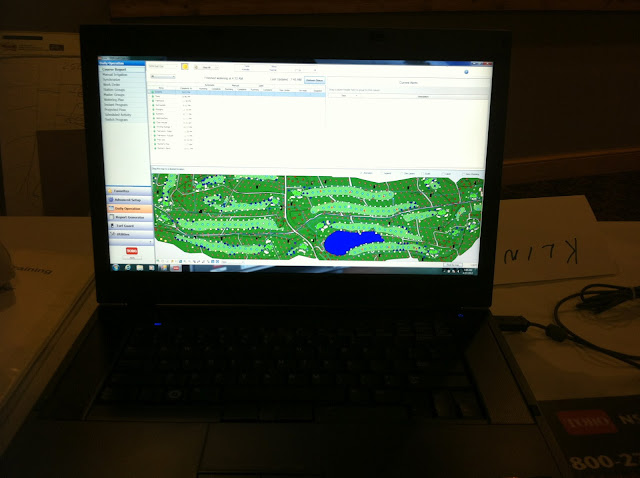 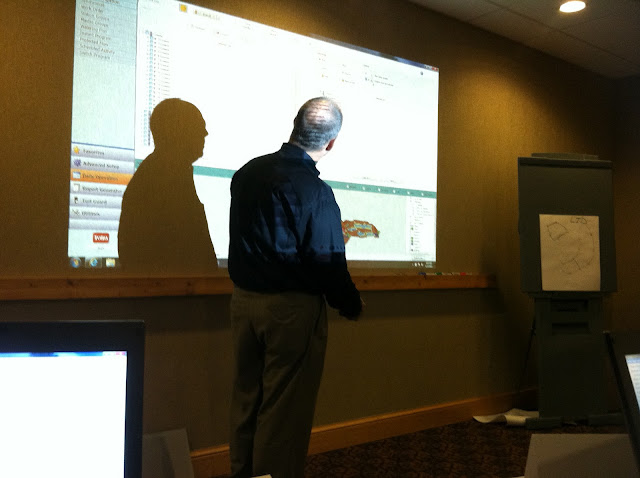 As we all know, the irrigation at Stillmeadow Country Club has been an issue throughout the years for the maintenance department.  I have said from when I started on January 2 that I was optimistic that we could get the irrigation system to a manageable state.  While I must admit that we are starting with the system in much worse condition than I ever could have imagined that we would; I am still optimistic.  We have a long road ahead but I know that with continued support from ownership we can fix problems faster than they can occur.  We will also do our best to fix them properly so that we don't have to continue to return to these same areas.  These problems are difficult and costly, but necessary to fix.

I am sure that many of you have seen us working on the electrical issue on #12 this week.  At one point we had almost every sprinkler head dug up that you will see in the pictures below.  We were identifying and tracing wires so that we could make the proper splices.  With some help from our irrigation sales and service tech with Century Equipment (Toro) we were able to get the following 11 sprinklers operational.  While we had the holes dug, we also turned the water off to #12 and cut the pvc piping that was running to three of the four heads around the green.  We then installed devices called swing joints so that we could raise the heads that were severely to low.  The heads were then leveled and back filled to the surrounding terrain. 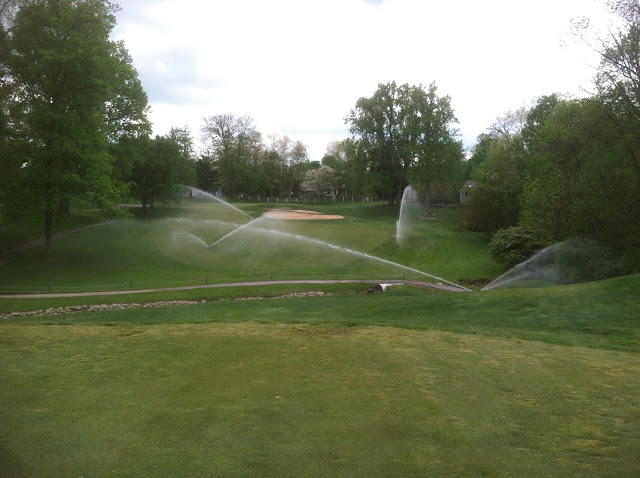 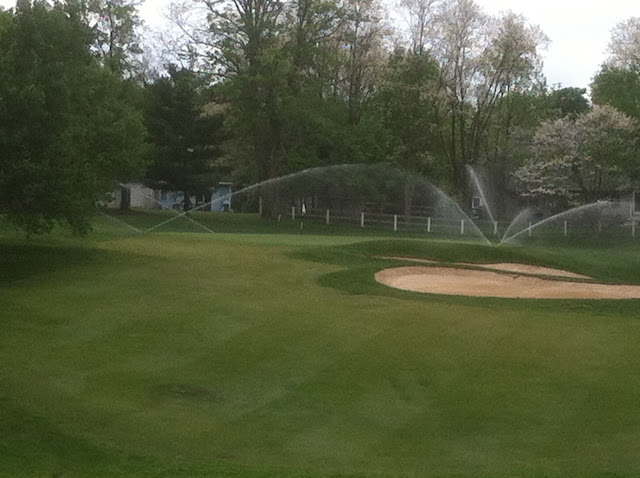 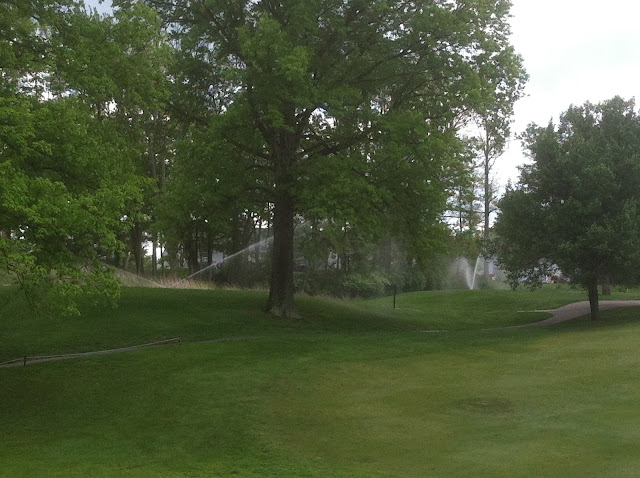 As we continue to make strides towards improving the irrigation we just ask for your patience.  We have a huge task ahead of us and that should be recognized by all.

Even The Owners Can Get Their Hands Dirty 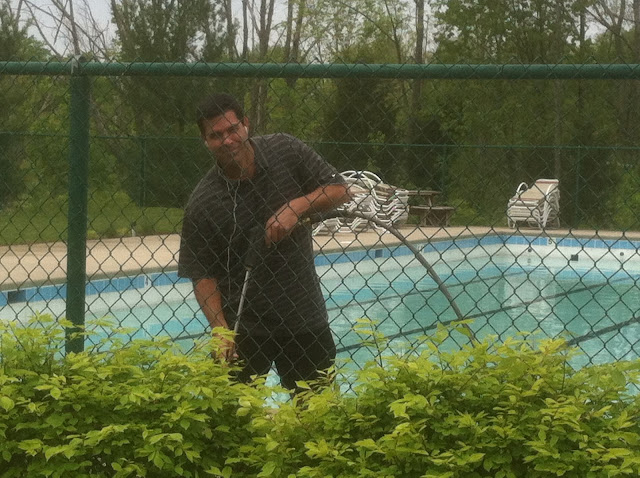 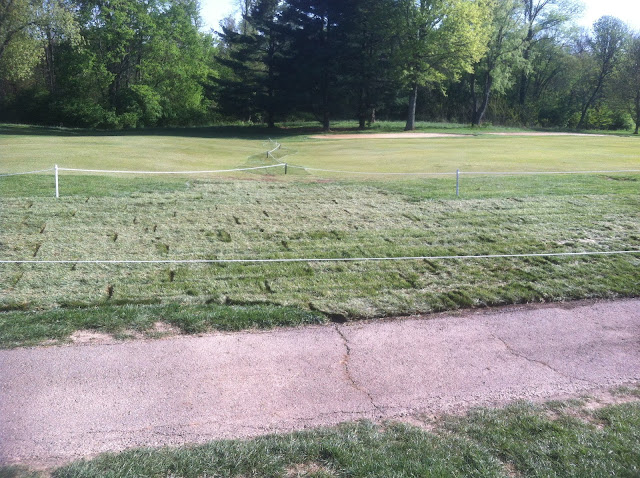 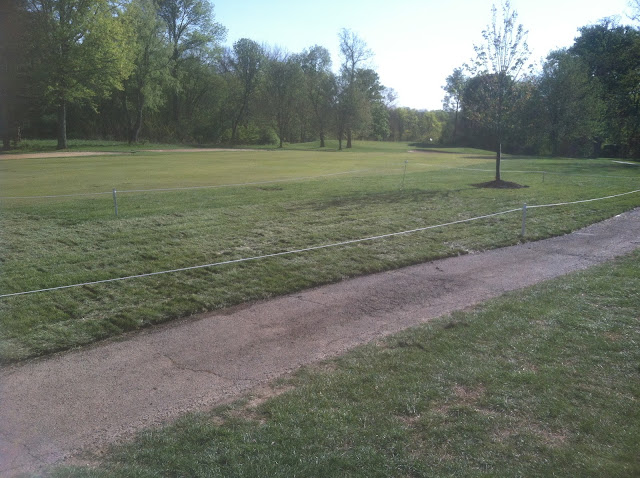 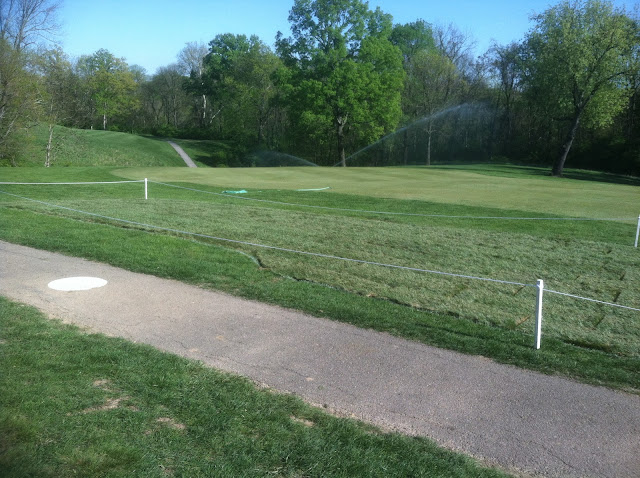 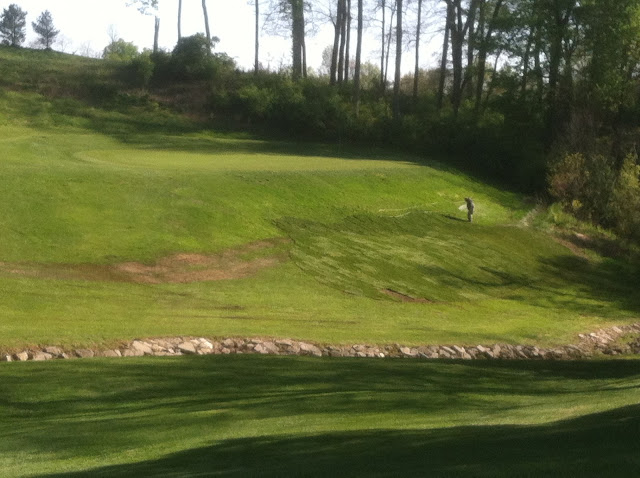 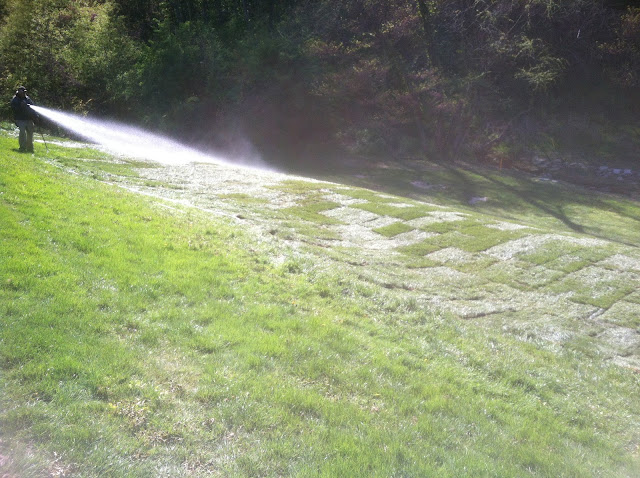 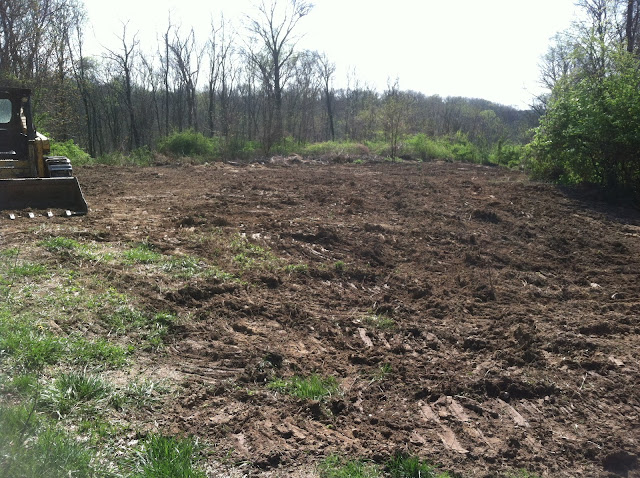 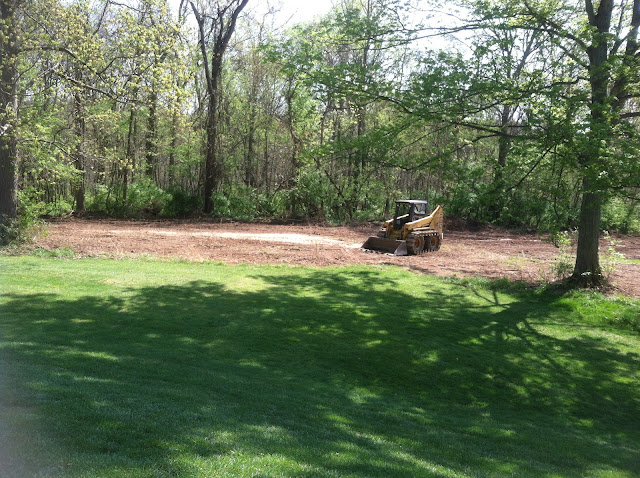 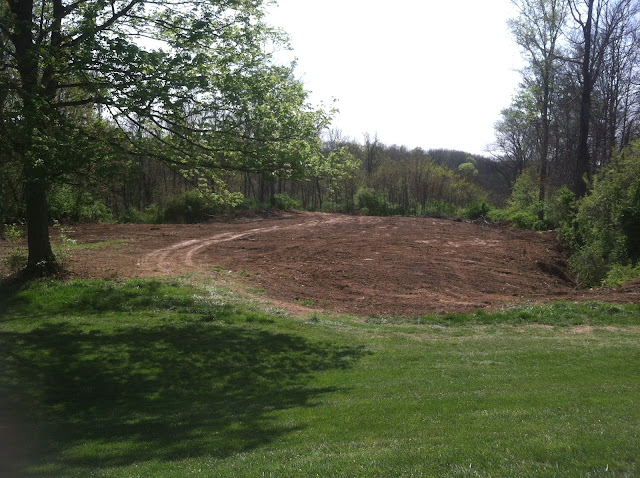 The clearing out of the corridor behind #4 green will provide us with much better air flow to the green.  Gas exchange in the soil is extremely important for a greens survival under stressful conditions.  While plants utilize carbon dioxide and release oxygen in the leaf tissue, the process in the root zone soil is just the opposite.  If a green doesn't receive air flow, the pour space in the soil is too often inhabited by water and there is no room for oxygen.  Basically if a grass plants roots cant breathe then you have an unhealthy plant.  Better air flow is especially helpful when we are able to open an area that is facing west from which the prevailing winds are derived.  There will be a noticeable difference in the performance of #4 green this season. 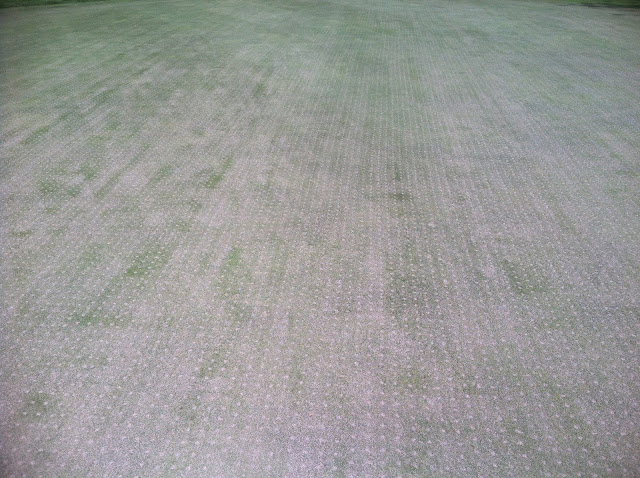 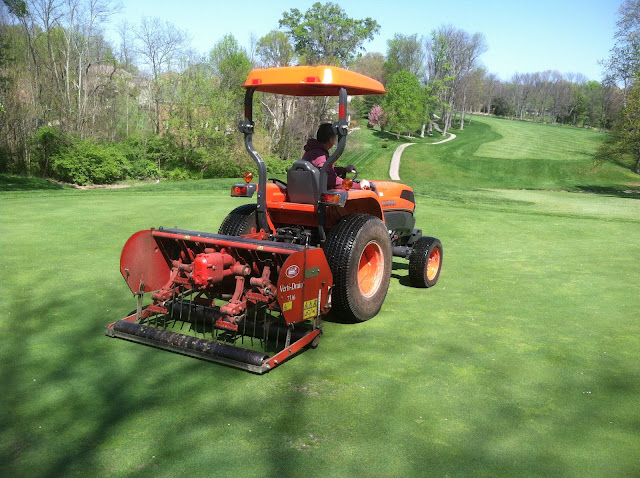 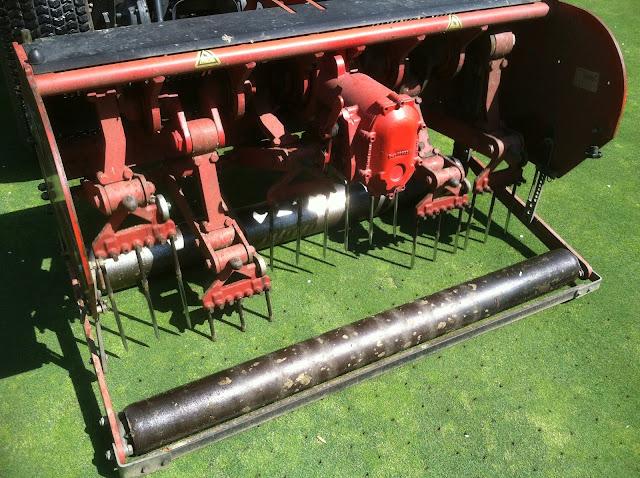 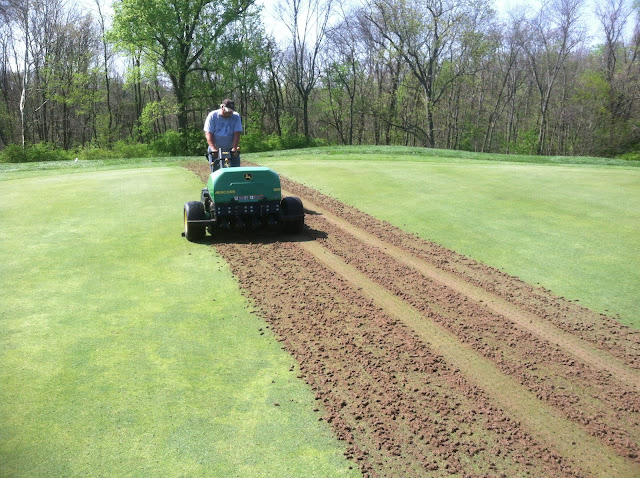 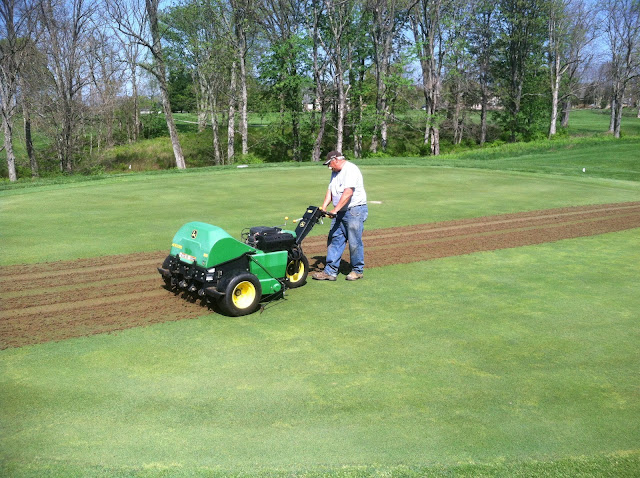 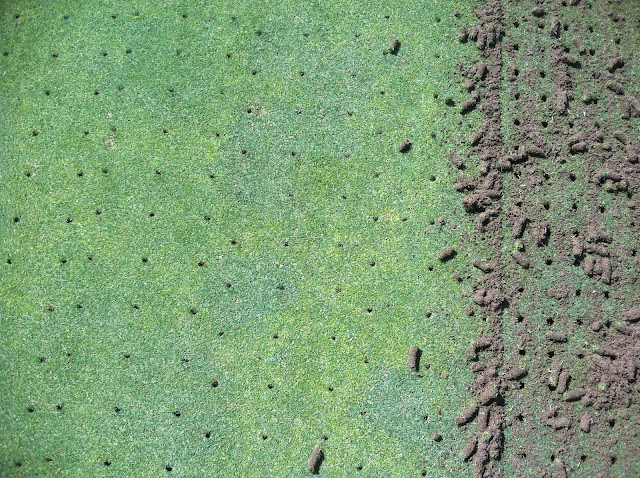 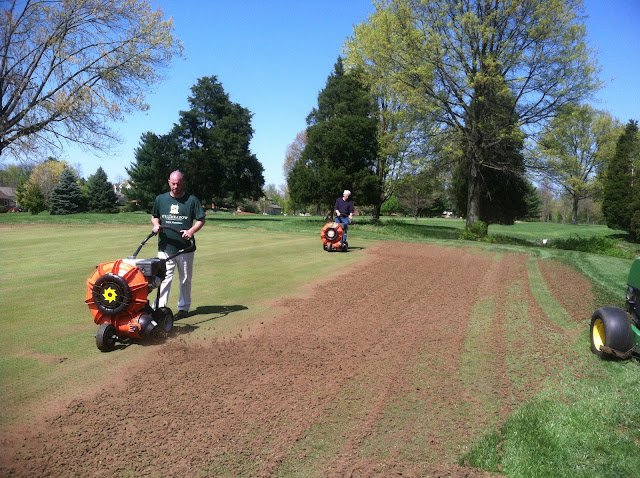 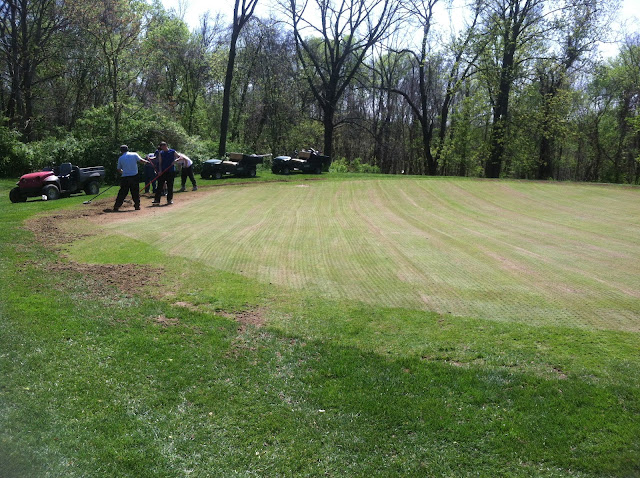 Step 4:  Topdress the green with sand 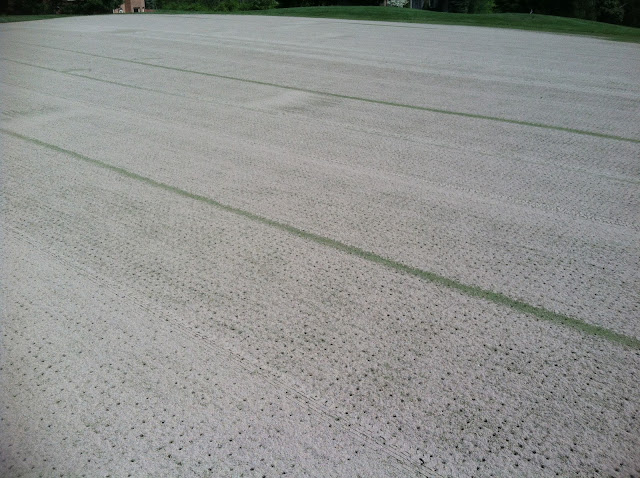 Step 5: Brush the sand into the holes after it dries thoroughly 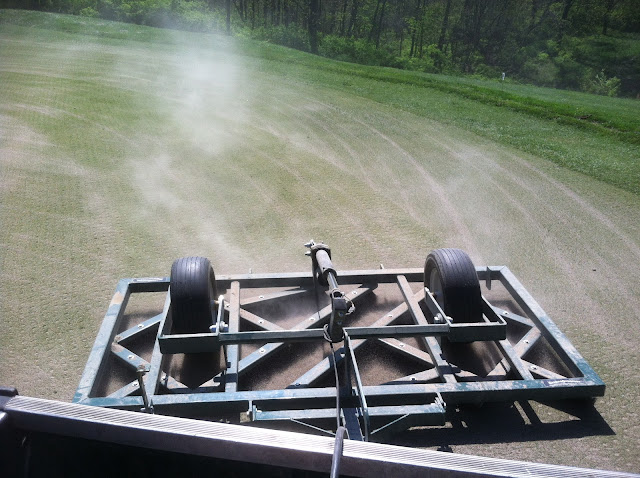 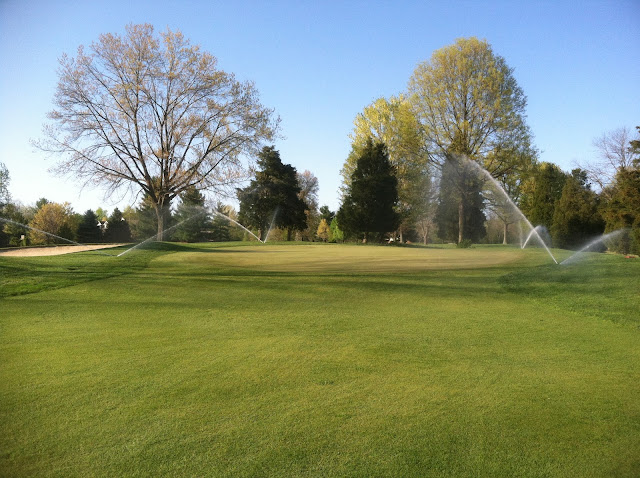